The story began in 1943 when a decision was made to build a slalom hill on Tjamstanin the middle of Malå. There used to be a sports hut there, built sometime between 1940-1941. The originator of the cabin was Hjalmar Bask and together with many volunteers and 1500 SEK he made the construction of the sports cabin possible. The cottage was handed over to the sports club in 1943 in connection with the construction of the slalom slope.

The slalom slope led to a boost for alpine sports in Malå! Rune Fallander moved to the municipality and devoted a lot of effort to developing the sport. Other profiles to be mentioned from the slalom in the middle of the 20th century were Erik Holm- lund, Folke Marklund, K.G. Sundin, P.O. Eriksson, Gösta Westling, Gunnar Bergström and Gunnar Norén.

The peak of the slalom era was reached in 1949 when DM competitions were held in Malå. The winner was Hasse Olofsson, Fjällvinden. 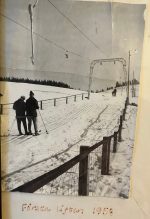 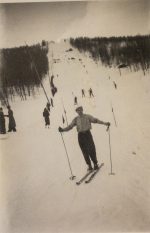 The pictures show Malå’s first lift, 1958. The picture to the right was taken before the lift existed.

A long time ago, the mine was moved from the Rackejaur mine to the foot of the Tjamstan. A lava is a feed mill used at a mine. Inside the lava at Tjamstan is an artwork by Tor Gunderssen depicting a tree made up of drill cores, symbolising the plant power that exists within Malå for generations to come. For many years, Malå Municipality wooed all newborns in the municipality and each child who was born received a leaf with a personal rune sign attached to the tree.

It is Västerbotten’s only remaining mining slave built in wood!

Today there is a warming hut, garage, conference rooms, rental apartment, rental of alpine equipment and more in Laven.

The information about this history is taken both from old pictures, but also from a thorough documentation that Egon Ebbeståhl, then chairman of MALÅ IF carried out for MALÅ IF’s 60th anniversary in 1996. Egon designed a brochure based on film clips in which Martin Marklunds told about his research on association life in the district and then completed the story based on saved meeting minutes.

What about the hotel? When did Malå get a hotel at the foot of the mountain? Construction of the older part of the hotel began in 1961 and was completed in 1962.

The story of the old mine slave

“I remember that Boliden was going to demolish the old mine in the 1990s and Malå municipality was asked if we wanted to take care of it and preserve it”, says Sture Hedström, then head of services at Malå municipality.

“We discussed locations such as Nölviken and Sjöparken, but ended up at the foot of Tjamstan. It was a great finish, one might think in retrospect.“

But Sture Hedström points out that the driving force in Laven’s development at this time was Östen Renström, for many years the operations manager at Malå Tourism and one of the initiators of the move of Laven from the Rakkejaur mine.

Once the municipality decided to take care of the old mining lava, project money was sought. The move cost around SEK 10 million.

“If I remember correctly, the municipality only had to pay SEK 1 million of these, the rest was paid for by EU money”, says Sture Hedström.

Said and done. The lava was dismantled in parts and moved from Rakkejaur to the foot of Tjamstan in Malå, a journey of almost 3 miles.

It took a few years to renovate the building, which was converted into a conference room, a lookout point, a geo museum and offices. It was built together with the existing building, which included a tourist office and restaurant.

Britta Stenberg, journalist and author, printed a letter to the municipality with the following proposal: that Malå municipality should plant a tree for every child born and place it in the Sjöparken in central Malå.

The Municipal Board gave the management team in the municipality the task of handling Britta Stenberg’s proposal, which the Municipal Board found interesting in the light of the forthcoming millennium change. Each member of the management team was asked to go into his or her chamber, think and come up with a proposal. Sture thought, and gave the following suggestion based on Britta’s idea:

“A work of art in the form of a tree with a sturdy trunk and tree branches that will symbolise the growth power of Malå for generations to come. Drill cores are used for the construction of the artwork. Every newborn Malåbo gets his name and birth number on a drill core. The artwork will be placed in Laven.”

The management group presented the proposal to the City Council, which instructed Sture Hedström to implement it. The artist Tor Gundersen, then living in Malå, was contacted and agreed to the commission. Tor expanded on the proposal and added another dimension: that a unique runic character should be carved on the leaves to replace the names and a register should be established so that each newborn could recognise his or her own leaf in the future.

SGU provided old drill cores and access to a rock saw. Sture sawed the stones and assisted Tor with the assembly.

The tree was inaugurated at the turn of the millennium (2000) and the following year the non-profit association Georange was founded and set up its office in Laven.

The original idea behind the Georange association was that the mining and minerals industry in northern Sweden needed an independent arena where different efforts and interests could be brought together and coordinated. Since then, Georange has been working to create partnerships and networks linked to the mining industry. During the years Georange’s office was stationed in Laven, many scientists visited the building for conferences and meetings. Östen Renström set up a geomuseum in the basement, which was then moved to SGU’s basement premises in Malå.

“I was a finance officer for a few years in Georange, so I’ve worked for many years under Lava’s roof. By the way, the acoustics in the building are fantastic,” Sture says and continues:

But everything has its time. In 2010 Georange moved out (today Georange is based in Skellefteå) and the Tourist Office was moved to the library. The leaves for the newborns stopped being made, but the tree still stands today inside Laven in the pillared hall that now serves as a conference room. The hotel owner at the time was given the lease of Laven and converted the office part into an apartment. Today it serves as a rental apartment and is rented out by Hotel Tjamstan.

Facts about mining and the Gold Kingdom

*Strax before the turn of the century 1900, the young Petrus Jonsson from Murpejaure found a golden shimmering stone at Kristineberg. He put it in a sack and took it to Cederlund’s shuttle station in Malå-Vännäs where he showed it to some travellers, among them an agronomist named Häggbom. The agronomist, who also had some knowledge of geology, examined the find at length before throwing it into the fire and concluding, “Sulphur biscuits!” Petrus Jonsson’s find had no value that time. But in the early 1900s there was a shortage of metals, and old finds were sometimes re-examined, including Kristineberg.

*In Adak (later the Adak mine was built) the ore was found by chance. It was in the summer of 1921 during a road construction near Kourbevare.

*1924 The large ore body is found in Boliden, which became the start of the Boliden area.

It was thus the local population that found the first finds, but quite soon, at the end of the First World War, the search was taken over by exploration companies, especially the privately owned Centralgruppens Emisisonsbolag, which later became Boliden AB and the Swedish Geological Survey (SGU), which from 1933 had offices in Norsjö. But in the early 1980s, over 200 people worked at SGU’s office in Malå, when a major expansion of their premises in Malå was also made. In 2022, 5 people will work at the SGU office in Malå.

Before it was moved to Malå from Rackejaur, it served as a forwarding slave with a tailor’s house at the Rakkejaur mine. Moved to Malå in the 90s. In Malå it has served as a project office, base for Georange, geo museum, party room, office for “Malå Turism”, conference room, restaurant, café and more.